The Minister of Tourism, YB Dato’ Sri Dr. Ng Yen Yen has launched the 1Malaysia Year-End Sale (1MYES). The 1MYES, which will be held until 01 January 2013, aims to encourage shoppers from all over the world to come to Malaysia to celebrate the last two months of the year with a fabulous shopping experience. 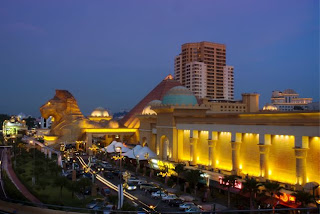 One of three major shopping seasons in the country, 1MYES is the end-of-year shopping event that ends the year in style. The 1Malaysia GP Sale coincides with the Formula One Grand Prix in KL in March and the 1Malaysia Mega Sale Carnival is held during the summer holidays.

Shopping is a lucrative sector of Malaysia’s tourism industry. It holds the second biggest share of tourist expenditure after accommodation. Last year, tourists spent RM17.5 billion on shopping which constituted 30% of the total receipts of RM58.3 billion. It recorded a growth of 8 percent against the figure in 2010 (RM16.2 billion). In 2000, when the first Malaysia Mega Sale Carnival was organised, shopping only constituted 23.1% of total tourist expenditures.

Foreign tourists and locals alike have 55 days to take advantage of the great discounts and special offers put together by various shopping malls nationwide. The shopping malls will host numerous exciting events to make Malaysia the place to go for shopping, fashion and food throughout November and December.

In Kuala Lumpur, the Sungei Wang Plaza shopping mall will offer its visitors a chance to win a pair of Yoga Lin Concert tickets while the Kenanga Wholesale City will organise a treasure hunt to challenge its shoppers. The Mines shopping mall in Seri Kembangan, Selangor will run a competition to win a 2 day, 1 night stay for four at the Golden Palm Villa in Sepang, a gold set from Poh Kong and other prizes. In Penang, a Garfield and Friends Meet & Greet will take place at the Queensbay Mall while the 1st Avenue mall invites shoppers to participate in a kolam design competition to get into the spirit of Deepavali. The East Coast Mall in Kuantan, Pahang has workshops for Christmas clay doll painting, Christmas card decoration, Christmas origami and New Year card design for its visitors. The Boulevard shopping mall and the Imperial mall in Sarawak will entice its visitors with the “Buy & Fly!” Lucky Draw Contest which offers return tickets to Taiwan, Hong Kong, Japan and South Korea.

MasterCard cardholders will get the opportunity to walk away with instant redemptions and exciting competition prizes at participating malls in Malaysia.

The KL Fashion Weekend will be held on 21 and 22 November 2012 at the Kuala Lumpur Performing Arts Centre (KLPac) in Sentul, Kuala Lumpur. The two-day fashion showcase will present fashion shows featuring new trends for hair, make-up and fashion from the Autumn-Winter 2012/2013 collection. The participating departmental stores include Debenhams and Metrojaya. For more information and to register for free seats, log onto www.klfashionweekend.com. Walk-in guests are required to turn up an hour before the show.

Kuala Lumpur has been ranked the second best shopping destination in Asia Pacific – as reported by the latest Global Shopper Index, cementing its position as a shopping paradise.  The report stated that Kuala Lumpur’s specific strength is its ability to combine low prices with a good range of products in a large number of stores. It also took note of the Government's mammoth investments in developing KLCC and Bukit Bintang as a “premier shopping precinct in Malaysia”. Twenty five cities in the region were assessed under five categories in the Globe Shopper Index which was created by the Economist Intelligence Unit, commissioned by Switzerland-based shopping tourism company Global Blue.

Positioning Malaysia as a duty-free shopping destination for tourist goods is one of the three Entry Point Projects (EPPs) undertaken to increase shopping receipts to 35 percent by 2020, under the Malaysia Tourism Transformation Plan (MTTP).

Imported goods that are not subject to custom duty at all are readily available all over the country and not limited to duty-free zones. Aside from 5 categories of products – cars, glasswares, cigarettes, alcohol and chocolates - all other products are tax exempted in Malaysia. Shoppers can look forward to more varieties of imported goods at better prices. This move is part of the Malaysian Government’s efforts to enhance the country’s position as a destination for duty-free shopping. Through this effort, Malaysia hopes to attract a wider range of principal brands to invest in the country. It also facilitates lower and more competitive pricing of imported merchandise, giving Malaysian retailers a competitive edge over retailers in other countries.

NOTES TO EDITORS• Visit: www.tourism.gov.my
• Malaysia Airlines fly daily from London Heathrow to Kuala Lumpur International Airport with Visa’s purchased on arrival for British passport holders.
• Year round events include the Royal Langkawi International Regatta in January, the Petronas Malaysian Grand Prix in March, the Malaysia International Shoe Festival in April, Colours of Malaysia Cultural Festival in May, Malaysia’s Summer Contemporary Arts Tourism Festival, Malaysia Annual International Gourmet Festival in October and the Summer and End of Year Mega Sales Carnivals with many other notable events throughout the year.
• Malaysia has a tropical climate and is a very welcoming multi-cultural society home to some of the best spa resorts in the world.
• Malaysian cuisine is as diverse as the nation itself, fusing the culinary traditions and flavours of Malay, Chinese, Indian, Arabian and European cooking.
Posted by Representation Plus at 01:32