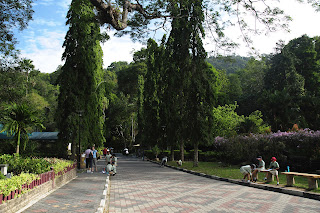 An unrivalled taste of exotic Southeast Asia comes to Britain this autumn as the Royal Botanic Garden Edinburgh (RBGE) goes public with new plant treasures from its research and conservation collections, for the launch of a Malaysian Glasshouse Trail on Tuesday, October 9. Realised thanks to support from Tourism Malaysia and the ongoing efforts of Professor Stephen Blackmore, the Regius Keeper of RBGE, the innovative attraction includes species not previously seen on public display, as well as fresh audience interpretation of many plants native to the region and prized for their cultural and commercial uses.

“Malaysia is recognised as a hugely species-diverse country and RBGE is playing a key role in the documentation and conservation of the vast array of plants found there”, explained Dr Peter Wilkie, a tropical botanist who specialises in plants endemic to that part of the world. “By collecting and researching plants from the region scientists and horticulturists are developing better understanding of how the various species interact with the wider environment. Ultimately, this facilitates improved conservation initiatives in the native habitats”.

Head of Interpretation, Alan Bennell, added it had been an inspirational project to cultivate: “RBGE not only holds the world’s largest display of tender Vireya rhododendrons, it is also home to particularly diverse collections of African violets (Gesneriaceae), gingers (Zingiberaceae) and begonias (Begoniaceae), to name just four groups represented in Malaysia. Therefore, it makes absolute sense that we should work with Tourism Malaysia to allow the general public an insight into its amazing botanical treasures. Perhaps they may even be inspired to visit this beautiful country”.

As well as bringing out new plants from RBGE’s research glasshouses into public display, fresh forms of interpretation, including a Malaysian market stall, have been created to bring into context the true diversity of the country’s plant life.

Ecotourism is increasingly popular in Malaysia with tourists visiting the country’s preserved rainforest, appreciating the flora & fauna on display. More than half of Malaysia’s 329,758 sq km surface is covered by tropical rainforests that host an array of exotic and protected plants and animals. Amongst the many great sites include Perdana Botanical Garden, Hibiscus Garden and Orchid Garden, Putrajaya Botanical Garden, Cameron Highlands, Secret Garden-Petaling Jaya and the Danum Valley Conservation Area in Borneo, recently visited by the Duke and Duchess of Cambridge.

Dato’ Sri Dr. Ng Yen Yen, Minister of Tourism, Malaysia, who has been central to the inception of the trail, said she believed the partnership was a uniquely special way allowing British residents – and tourists visiting Edinburgh – a clearer insight into the magnificent natural resources of this vast multicultural land and further strengthening relationships and reciprocal tourism between Scotland and Malaysia.

“Malaysians are known to be warm and friendly, the country’s geography is as diverse as its culture, as recently witnessed by the Duke and Duchess of Cambridge on their tour of Malaysia, which included the Danum Valley Conservation Area’s rainforest and gardens”, she commented. “This means we have splendidly extreme contrasts, from the cool hideaways of the highlands that roll down to warm sandy beaches and rich, humid, mangroves. The new display at Edinburgh presents this landscape in an exciting new way. In the longer term, perhaps it may even encourage more people from Britain to visit Malaysia and experience our magical country first hand.”

NOTES TO EDITORS
Posted by Representation Plus at 09:42