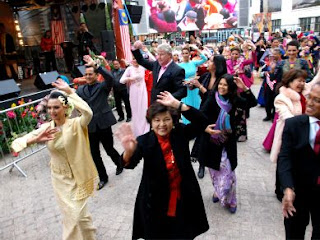 At the closing ceremony of Malaysia Week, Minister of Tourism, YB Dato’ Sri Dr. Ng Yen Yen, thanked guests for their participation in celebrating the “Faces of 1Malaysia” themed week-long event. “As the ninth most visited country in the world for the third consecutive year, Malaysia has cemented its place as a top destination for both business and leisure.” The Minister of Tourism stated; “Malaysia has introduced various innovative tourism products such as the 1Malaysia International Shoe Festival, 1Malaysia International Night Floral Parade, Fabulous Food 1Malaysia, Parks & Garden tourism, Helicopter Tourism, Bicycle and Motorbike Tourism.”

She thanked British tourists for their loyalty to Malaysia stating, “It is great to learn that all our efforts and commitments bear luscious fruits after all. The UK was the eighth top tourist generating market to Malaysia last year. Close to 404,000 British tourists had a personal experience of the fascinating sights and sounds of the country. The first half of this year already saw about 197,000 British tourists come to our shores, which was a 5.9 percent increase against the same period of last year.”

She explained how Malaysia has secured its place as a renowned shopper’s paradise as, “shopping holds the second biggest share (30%) of tourist expenditures contributing RM17.5 (USD5.5) billion last year. Avid shoppers can benefit from three sale periods namely the 1Malaysia GP Sale in March, the 1Malaysia Mega Sale Carnival in June and the 1Malaysia Year-End Sale in November.”

NOTES TO EDITORS
• Visit: www.tourism.gov.my
• Malaysia Airlines fly daily from London Heathrow to Kuala Lumpur International Airport with Visa’s purchased on arrival for British passport holders.
• Year round events include the Royal Langkawi International Regatta in January, the Petronas Malaysian Grand Prix in March, the Malaysia International Shoe Festival in April, Colours of Malaysia Cultural Festival in May, Malaysia’s Summer Contemporary Arts Tourism Festival, Malaysia Annual International Gourmet Festival in October and the Summer and End of Year Mega Sales Carnivals with many other notable events throughout the year.
• Malaysia has a tropical climate and is a very welcoming multi-cultural society home to some of the best spa resorts in the world.
• Malaysian cuisine is as diverse as the nation itself, fusing the culinary traditions and flavours of Malay, Chinese, Indian, Arabian and European cooking.

Posted by Representation Plus at 05:35