April 2013 will be celebrated with a combination of water events, flashing jewellery and culture enrichment in Malaysia with the following monthly highlights:

MALAYSIA WATER FESTIVAL PORT DICKSON, 3 – 5 APRIL 2013
The Malaysia Water Festival is back with Port Dickson as its first station; activities like the International Jet Ski Challenge and beach soccer competitions will be there to cool down the tropical heat. As one of the most anticipated events in Port Dickson, it is expected to draw more than 130,000 tourists. So, get ready to join the party! 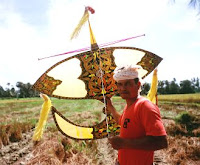 KELANTAN STATE’S CULTURAL CARNIVAL 2013, 5 – 8 APRIL 2013
The annual 2013 Kelantan State’s Cultural Carnival returns to promote the uniqueness of Kelantanese culture that differs from most of the Malay cultures. It is initially an event to promote Kelantan as a tourist destination with rich culture, natural attractions and delicious food. Highlights of the event include the cultural practices of dikir barat, mak yong, and wau bulan (kite-flying). Handicraft products such as songket, silverware and mengkuang will also be introduced to the visitors. The event is taking place at Compound of Sultan Muhammad IV Stadium, Kota Bharu, Kelantan www.tic.kelantan.gov.my.

ARCHIPELAGO DRUM FESTIVAL 2013, 9 – 17 APRIL 2013
Prepare to get into the rhythm of percussion and drum music from all over the world at the Archipelago Drum Festival 2013 at Dataran MBMB, Melaka. Performers from Malaysia, Indonesia, South Korea and other countries are invited to present their art. It is an event initially held to raise awareness among the younger generation to engage with their heritage.

Notes to editors:
• In 2014, Malaysia will celebrate its fourth VISIT MALAYSIA YEAR (VMY) with the theme “Celebrating 1Malaysia Truly Asia”. The VMY 2014 promotional campaign has started this year with a series of year-long special events and activities leading to VMY 2014. It will contribute to the Government’s target to receive 36 million tourist arrivals and RM168 billion in receipts by 2020, as outlined in the Malaysia Tourism Transformation Plan (MTTP) 2020.
• Malaysia has a tropical climate and is a very welcoming multi-cultural society home to some of the best spa resorts in the world.
• Malaysian cuisine is as diverse as the nation itself, fusing the culinary traditions and flavours of Malay, Chinese, Indian, Arabian and European cooking.

Posted by Representation Plus at 03:01