The Tatler Travel Award 2013 was held at The Ritz Hotel in London on 28 November. Walking away with the prestigious title of “Enduring Excellence” was Langkawi’s own pride and joy, The Datai Langkawi. This honorable win was the top award amongst the eight other awards presented throughout the night and was the only win for South East Asia and Malaysia.

The prestigious Tatler Travel Awards are held in extremely high esteem and this year’s awards were no exception with the magazine’s new Travel Editor Francisca Kellett taking the stand to honor the award winners. An expert panel made up of Tatler’s editorial team select the winners; each hotel has been visited by Tatler and is chosen from the 101 hotels featured in the annual travel guide. 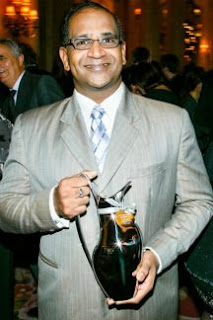 The top Tatler award was accepted by Mr. Anthony A. Sebastian, General Manager of the resort (pictured). “I am very proud to be representing Malaysia as well as putting Langkawi Island on the map as a top luxury holiday destination. The Datai Langkawi will continue to uphold its pledge of excellence through providing the very best resort stay the island can offer. I’d like to thank my team, our travel partners as well as the owners for their constant support and dedication to ensuring The Datai continues to uphold its excellent standards,” said Mr. Sebastian.

The Tatler Travel Award 2013 also recognized eight other hotels from around the world for a variety of categories which included ‘Super Villa’, ‘Greatest Adventure’ and ‘Spellbinding Service’. Parrot Cay in the Carribean, Titilaka Lodge in Peru and Palazzo Avino in Italy were some of the other respective winners of the night.

The Datai LangkawiThe Datai Langkawi is the standard bearer for luxury hotels in Malaysia and is an iconic resort with an international following and one of the world’s most stunning hideaways. Situated in the northwest tip of Langkawi Island in Malaysia, surrounded by an ancient tropical rainforest, a white sand beach and overlooking the azure waters of the Andaman Sea, The Datai has put Langkawi on the map for discerning travellers. The Datai Langkawi’s 54 well-appointed deluxe rooms, 40 villas,16 suites and 14 beach villas, all offer scenic views of nature and the jungle, and a range of dining options for indoor or alfresco meals. Two swimming pools, an award-winning spa nestled under the rainforest canopy and the nearby 18-hole championship Ernie Els designed Datai Bay Golf Course (re-opening October 2013) provided for leisure pursuits.

The Datai Langkawi is managed by Datai Hotels and Resorts, a niche player in luxury hotel management. www.dataihotels.com.