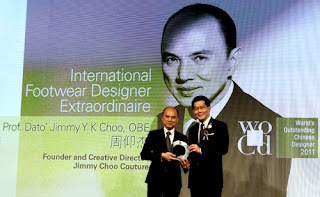 Dato ProfessorJimmy Choo OBE, was presented with the 2011 World’s Outstanding Chinese Designer Award at a ceremony at the Hong Kong Convention and Exhibition Centre by the Honorable Gregory So, Secretary for Commerce and Economic Development of the Government of Hong Kong Special Administrative Region. This honor is reserved for designers of Chinese heritage who have demonstrated significant contribution to the design community and a continuous devotion to the development of design through supporting educational, training and research activities across the globe. Since 2000, when Jimmy Choo was bestowed the title of Honourable Dato’ (equivalent to a British Knighthood), he has received more than 15 awards including an OBE in 2003.

Choo, the son of a reputable shoe designer in Malaysia, spent his early years on the idyllic island of Penang working as his father’s young apprentice. Determined to master the art of shoe design, he came to London in the 1980’s to study footwear at Cordwainers College.

Since establishing his couture label in 1986, Choo’s made-to-order designs have included an extensive range of hand beaded; hand stitched and personalised shoes ranging from slippers, sandals and mules to boots.

In 1988, Vogue ran an 8 page spread featuring Choo’s creations teamed with clothes from various British dress designers. This affirmed his status as a shoe designer and master craftsman and Choo has never looked back since. Today, Dato Professor Jimmy Choo is forefront in several areas, namely, at his couture house on Connaught Street, secondly in his support for education as Ambassador for Footwear Education at the London College of Fashion and a spokesperson for the British Council in their promotion of British Education to foreign students and thirdly in his active support for his native country as Tourism Ambassador for Malaysia since August 2009.

Commenting on his role as Ambassador Jimmy Choo says:

“Although I am living in London, it is my responsibility to promote Malaysia as a unique tourist destination on the other side of the world”. He adds, “I am still a Malaysian, every time someone asks me where I come from, I will instinctively promote my country to them”

“As a world renowned celebrity icon Dato Jimmy Choo is the perfect candidate to help Malaysia promote its tourism in the UK and we congratulate him on this recent accolade”, commented Abdul Rauf Abu Hassan, Director of Tourism Malaysia in the UK & Ireland.

Note to editors:
Mr Jimmy Choo has been honored with many awards over the years including the the following:
2000, Title of Honourable Dato’ (equivalent to a British Knighthood) by the Sultan of Pahang.
June 2000, Choo was one of the first six recipients of the Gold Award from the Association of Colleges
May 2001, Title of visiting professor by The London Institute
June 2003, Honorary OBE
Feb 2004, Admitted to the Freedom of the Company of Cordwainers and clothed as an Honorary Liveryman of the Company
May 2004, Title of Honorary Fellow of London University of the Arts
July 2004, Honorary Doctorate of Arts (Design) from De Montfort, Leicester
Aug 2004, Title of Dato’ from The Head of State of Penang
Nov 2006, “Freedom of the City of London”
Nov 2006, Lifetime achievement award at Malaysia- International Fashion Week
June 2007, Special Recognition from the Ministry of Culture, Arts and Heritage, Malaysia
Aug 2009, Named as Malaysia’s tourism Ambassador
September 2009, Honorary Fellow of the Royal Society
January 2010, Honorary President for the International School of Creative Arts
December 2011, World’s Outstanding Chinese Designer Award

Posted by Representation Plus at 04:00